What will people say about you after you die?

How do you want to be remembered?

When you speak to people about someone they’ve loved and lost, you wonder what people will say about you when you’re gone. I’ve never met Tarek Al-Kadri, who died a year ago on June 5, 2021. I’ve had to rely mostly on what other people say.

Here’s what they say:

“Tarek Al-Kadri lived his life serving other people. He sacrificed himself to do good in this life. He was always thinking about establishing justice for the oppressed, and he spent his life doing it.” (Mouffa Nahhas, MLFA Board Member)

“This was the brother that would invite random people from the masjid to his house for lunch on a weekly basis, especially those he felt were being left out.” (Omar Suleiman)

What struck me in my research was the consistency with which people expressed Tarek’s warmth and commitment to kindness for all. It wasn’t until I spoke with Abdulrahman Al-Kadri, one of Tarek’s sons, that I started to feel that warmth for myself.

Abdulrahman told me, “If he met you today, he would love you.” He would go home and tell his family about this amazing new person. They teased him that each person he met was his new favorite person.

I felt Tarek’s warmth when Abdulrahman told me about how he tries to live up to his dad’s example. “I don’t have problems with anyone”. He explained that his father showed him how to let things go. Tarek didn’t hold grudges, didn’t cut you off. He would bring home the homeless guy or pick up a stranger at the airport if he needed a ride. Even if someone took advantage of him, he might invite that same person to dinner later on. He looked for and found the best in each person.

When I was little, I remember smiling at everyone. Sometimes it would take a while, but I could feel the warmth and goodness spread just by approaching each person as my new best friend. Of course we outgrow this. We get hurt. We learn to protect ourselves. This is just part of being human.

Hearing Tarek Al-Kadri’s story rekindled that warmth in my heart. In the course of my research and especially in speaking with Tarek’s son, I was moved from my head to my heart – not always an easy path to find. The most consistent thing I’ve heard from people who knew Tarek is, “I’m trying to be like that.”

We talk about caring for our neighbor, and honestly, it feels like a weight sometimes, like a responsibility. And it feels like I’m falling short, always too busy or too selfish to live up to the examples of generosity in our communities and in our ummah.

What is still ringing in my heart is that Tarek didn’t seem to feel it as a weight, but gave freely of his time, resources, and energy out of genuine love and interest in other people.

After soaking in stories about Tarek Al-Kadri’s life, I find myself trying to live up to his example, too. I’ve been thinking about that kid I used to be, beaming at strangers along the way. I want to be more like her. I want to live up to Tarek’s example of wholehearted, genuine kindness.

Who is my neighbor?

There’s a Christian story about the Good Samaritan in which someone asks Jesus (peace be upon him), “Who is my neighbor?”

We know we’re supposed to take care of each other, but how far does that caring go? According to one hadith (Bukhari, Book 6, Hadith 109), your neighbor is 40 houses in each direction. Some scholars think that “the Prophet was employing hyberbole to imply that no absolute limitation should ever be placed on who can possible qualify as one’s ‘neighbor’” (Harpci, 10).

Other scholars take the forty houses in each direction literally: north, south, east, and west. I’m not sure I know the neighbor even 3 houses away. Is she going through a divorce? Are his kids in trouble at school? Did he lose his job? Do they have enough to eat? I don’t know.

What I like about 40 houses in each direction is that it makes me think of concentric circles. 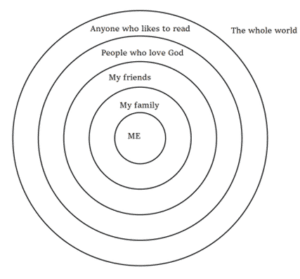 Let’s put you and your immediate family in the middle.

“When a Muslim spends something on his family intending to receive Allah’s reward it is regarded as sadaqa for him.” (Sahih Bukhari – Book 64 – Hadith 263)

There’s nothing wrong with taking care of your own first. Who else is better qualified to meet the needs of your immediate family than you?

Your circles might look different than my circles, but let’s say the next circle is your local community – the families at your kids’ school, the masjid near your house, etc. The next circle moving outward might be the Pakistani American community, or the Palestinians, or whatever bigger tribe you feel you belong to.

Tarek Al-Kadri remembered where he came from and took an active interest in the Yemeni and Yemeni American community. He supported the Yemeni Merchant Association in New York City. In his role as a community leader, he spent time meeting with the Biden administration and The Bill and Melinda Gates Foundation, educating them on the needs of people in Yemen during the war crisis. Pure Hands, one of the non-profit organizations that Tarek founded, grew out of advocating for Yemeni people and their basic needs.

The next circle might be all Americans. Or it might be all artists or all businessmen. And so on. You radiate your kindness and your compassion outwards from a position of power and strength.

Take a moment now and draw your circles. Think about where your kindness is spreading.

Compassion fatigue is a real thing. We can’t always hold the whole world in our hearts. Some days my heart contains the whole world; some days it’s hard to be patient with my husband or child, much less a stranger. Still, if we build our caring and our generosity in an intentional way, our warmth and our light might reach the world anyhow, most days.

My grandma worked in a factory for most of her life. She was always on the go and always exhausted. In her fifties and sixties, she was also caring for her brother, who lives in a veteran’s hospital hours from her house. One day, on the long drive to see my great uncle, I asked my grandma if it was heavy, this responsibility. It seemed like she never got a break, and it seemed so tedious, all these details and needs. I thought I was giving her a chance to vent.

She got quiet, and then she said clearly, with love and longing, “He’s my brother!”

Remembering the affection she had in her voice, the desire to be there for someone you love – it still brings tears to my eyes. It reminds me of another story where a man carries his disabled brother, saying, “He’s not heavy. He’s my brother.”

Hearing about Tarek’s life reminds me that caring should be that simple. Br. Ayman Aburahma describes Tarek’s willingness to care in the same way, “If we don’t do it, who will?”

“I remember the first time I saw someone lying on the cold street,
I thought, “I can’t just walk past you, this can’t just be true.”
But I learned by example to just keep moving my feet.
It’s amazing the things that we all learn to do.” (Ani diFranco, “Subdivision”)

When we see someone sleeping on the street for the first time, it feels like an urgent and immediate crisis. Let’s help this person right now. Then we learn to keep moving our feet. Ignoring the basic human needs of others becomes a habit.

Hearing about Tarek Al-Kadri’s way of caring reminds me of this true, initial feeling. As Muslims, we believe in basic human goodness, that each of us was born in a state of fitrah. Then we start to cover it up, with fear and hurry and calculated consequences.

Abdulrahman, Tarek’s son, explained that if we see good that needs doing, most of us take a moment to make some calculations. Will I be late for work? Will this get me in trouble? With admiration, Abdulrahman says that his father didn’t do this. If he saw something that needed doing or someone who needed help, he just went for it immediately, without weighing the consequences. He acted as though only Allah could see him.

May we all have the courage to live up to this example.

The Story Behind “He Ain’t Heavy…” | Boys Town

Pure Hands on Instagram: “We would like to convey our deepest condolences⠀ to the family of Br. Tarik AlKadri⠀ (Pure Hands’ Chairman)⠀ May Allah (SWT) shower him…”

CAIR Offers Condolences on Passing of ‘Two Giants’ Serving the Cause of Justice, D.C. Attorney Martin McMahon and MLFA’s Tarek AlKadri in Texas