Imad Wadi had his own business, importing and exporting cardamom from Texas to Colombia. He had an idea for a new business, to open up a halal slaughter service in South America with one of his close friends. Having done business in South America, they’d noticed that there was a demand for halal beef. They were developing a business plan but struggling to find investors. 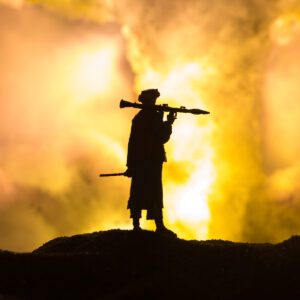 Mr. Wadi met someone who told him about a possible investor from Kuwait. In reality, both men were FBI agents. They started negotiating the terms of the investment. The “investor” told Mr. Wadi that he would fund the halal meat project if they could use a portion of the profits to fund the mujahideen in Syria. Mr. Wadi eventually agreed, eager to start his new business.

On June 9, 2021, the FBI charged Mr. Wadi with providing material support to a terrorist organization (the FBI’s fictional organization). The Federal Public Defenders’ office in San Antonio was assigned to represent him. Recognized as thought leaders in national security, our MLFA-funded attorneys are partnering with the Federal Public Defender to assist with the complex issues in this case. Despite the serious charges against him, the Magistrate Judge released Mr. Wadi until his trial. This shows that they did not believe that the businessman was a real threat.

The FBI created a crime. This happens a lot. Mr. Wadi was excited about starting a new business, and he made a bad choice. However, he would not have committed a crime if the FBI had not been involved in his life, pretending to be his friends and partners.

Maybe you’d like to distance yourself from this kind of activity, sure that you would never make the same mistake. The issue is that having the FBI playing games in the lives of American Muslims affects the baseline of safety and trust for a whole community. It’s too much. It’s too far. It’s about proving that they’re fighting terrorism when in reality they’re violating privacy and spreading fear.

“Pens and books are the weapons that defeat terrorism.” – Malala Yousafzai

The government could truly end contributions to terrorism by supporting education in the United States and in countries around the world. The FBI and other government organizations are spending billions of dollars surveilling and targeting Muslims in the United States. They could spend a tenth of this money and actually end terrorism in the world.

I’m not okay with them using my brothers and sisters to make it look like they’re fighting terrorism. MLFA stands with Mr. Wadi. We stand against policies that trick people into committing crimes.

By telling these stories and by standing shoulder to shoulder with community members like Mr. Wadi, we’re changing the narrative of Muslims in this country. We’re moving towards fearlessness. Will you come with us?