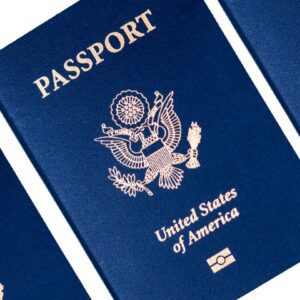 I love to travel. That said, I hold my breath when I go through airport security.

Mr. Jibril, his wife, and their five children are U.S. citizens living in California. In 2018, the Jibril family were traveling from the United States to Jordan to visit family when they were stopped by airport security. Their boarding passes all had “SSSS” (Secondary Screening Security Selection) markings, a code that alerts TSA agents[i] to conduct searches related to the various lists often referred to as “Terror Watchlists”[ii]. They all endured more than two hours of searching and questioning, including their 2-year-old child!

They were eventually allowed to board their flight to Jordan. When leaving Jordan, they were again interrogated for two hours, and the family again suffered extensive searches and interrogations during a layover in Abu Dhabi: “The children were separated from their parents and questioned, and the family’s electronic devices were searched.”[iii] The family missed their flight and had to stay the night in Abu Dhabi.

Airport security is an unfriendly process, best case. For anyone. For Muslims, we have the added pressure of feeling like we’re viewed as terrorists. If another passenger sees me get something from my bag, will they panic and accuse me of being a hijacker? These fears are not unfounded. Maybe you remember the American Muslim student who was kicked off a Southwest flight for speaking in Arabic[iv].

The Department of Homeland Security has a process for requesting information when you’re subjected to questioning and searches at the airport. According to their website, “People who have been denied or delayed airline boarding; have been denied or delayed entry into or exit from the U.S. at a port of entry or border crossing; or have been repeatedly referred to additional (secondary) screening can file an inquiry to seek redress.” [v]

Based on their scary experience, the Jibrils wanted to understand why this had happened to them. They asked if they were on a watchlist. That’s where it gets weird. If you’re on the No-Fly list, you’ll know because they’ll tell you when you try to board the plane. But the Terror Watchlist is like something from a dystopian novel – you can ask, but they won’t tell. When the Jibrils made a formal request to know if they were on the Watchlist, they received a letter saying that DHS[vi] “can neither confirm nor deny” the family’s watchlist status.[vii]

MLFA-funded CLCMA attorneys stood up in court on behalf of the Jibril family. They filed a lawsuit claiming Fourth and Fifth Amendment violations and seeking judicial intervention. What they suffered was beyond standard security practices. The family was understandably shaken up and afraid to travel. The children especially were traumatized, saying that they were made to feel like criminals. The government argued that the Jibrils didn’t have the right to sue because they didn’t know if they were on the Watchlist. What? They didn’t know because they weren’t allowed to know.

CLCMA attorneys appealed. The case ended up in the DC appellate court, which is as close as you can get to the Supreme Court. Government counsel told that court that if the Jibrils wanted to know if they were on the watchlist, they should try to travel again and see what happens.

This time, the Court recognized that this was a ridiculous thing to say. “At oral argument, Government counsel suggested that if the Jibrils would like to determine whether they remain on a terrorist watchlist, some or all members of the family can book another trip to see whether they endure the same problems that they faced in 2018. Whether this suggestion was meant to be a tongue-in-cheek quip or simply a heartless argument, it makes no sense.”[viii]

That an Appellate Court judge recognized this absurdity is a big win. Another achievement is that the case set a precedent for objecting to what happens to you at the airport. Christina Jump, Civil Litigation Department Head for CLCMA, explains that the watchlist is like a black box in that we as Americans have no access to the inner workings. This case and cases like it help to pull back the curtain just a little so that we can have some idea of what we’re up against. The Jibrils’ case also confirms that we have the right to challenge unconstitutional policies like the DHS TRIP redress process.

This is hard stuff. None of us really want to think about it. But we ourselves or people we care about can go to prison or have their lives torn up by ridiculous anti-Muslim practices. We have to stand up for each other. MLFA is in this fight, shaping the narrative of Muslims in America.